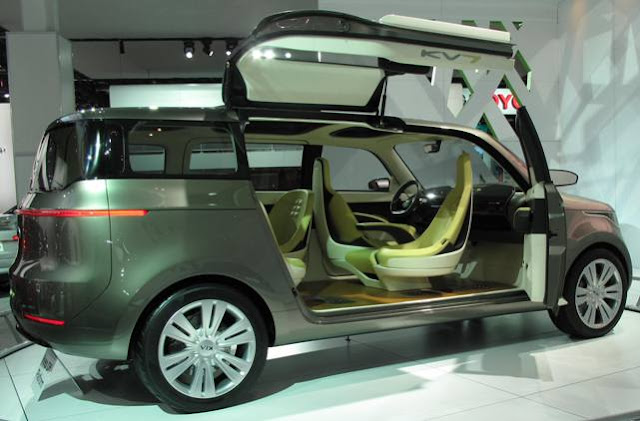 Kia Motors’ U.S. design studio unveiled — the “KV7” concept van that has a futuristic blend of curves around a boxy frame which some critics say borrows from the Ford Flex. It has corporate jet lounge-like seating where passengers can face each other to engage in conversation. It reminds me of the station wagon of the future which I saw as a kid at the 1962 Seattle World's fair. The front passenger seat that swivels around is a practical idea that more manufacturers should embrace to make an easy exit from the vehicle for our aging population - turn towards the door and step out rather than kicking your legs to the side. The large gullwing door that swings up to open may present some problems in tight parking spaces. 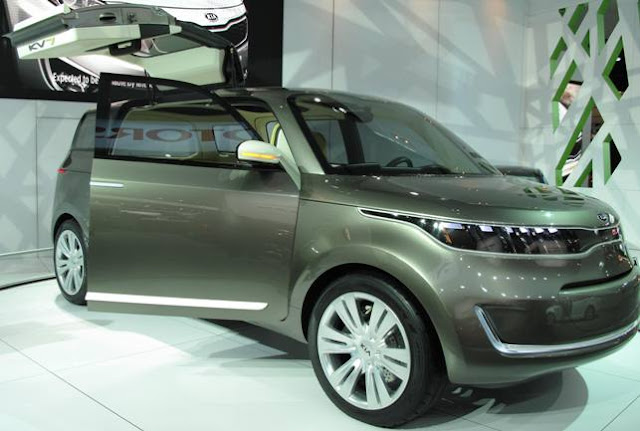 The KV7 concept is powered by Kia’s new Theta II 2.0-liter GDI turbocharged engine, which is capable of delivering up to 285 horsepower and is mated to a six-speed automatic transmission to deliver V6-type power and performance while achieving better than 30 miles per gallon on the highway. The KV7 concept is my choice for the most radically inspiring concept vehicle at the Detroit Auto Show because it mixes practically and personality into a van, a segment which many moms avoiding because of the stereo-type that goes with them. The KV7, if it becomes reality, could lure the crowd of minivan moms that have opted for SUVs and CUVs back to the van segment.
Posted by Rich Saxton at 9:36 AM