Thomas G. Stephens, 62, is the new Global Chief Technology Officer in a move to bring greater focus and urgency to developing leading edge technology for all General Motors vehicles. Stephens, 62, will continue to report to GM Chairman and CEO Dan Akerson who says  “Tom will make sure that GM technology keeps up with our customers and keeps ahead of our competitors.” The new CTO position is a major element of Akerson’s goal to make the company more customer driven and technology focused.  In December, Akerson elevated Joel Ewanick to Global Chief Marketing Officer, responsible for GM’s brands globally. Stephens also will be responsible for the company’s research and development organization led by GM vice president Alan Taub. The successor for Stephens is Mary Barra, named senior vice president, Global Product Development, to lead the design, engineering, program management and quality of vehicles for the company’s 11 brands around the world. Barra began her career with General Motors in 1980 as a General Motors Institute (Kettering University) co-op student at the Pontiac Motor Division. She graduated with a Bachelor of Science degree in electrical engineering. In 1988, Barra received a GM fellowship to the Stanford Graduate School of Business and in 1990 graduated with an MBA.

Linda Marshall has been appointed president of OnStar succeeding J. Christopher Preuss, who has elected to leave the company to launch a communications consultancy practice. Marshall joined GM in November 2010 as executive director, OnStar global business strategy and development from  the position of chief operating officer for Revol Wireless. She will report to Stephen J. Girsky, vice chairman, corporate strategy and business development. Marshall has more than two decades of experience in the telecommunications industry, including senior executive-level roles at both Sprint Nextel and Verizon Wireless.  She holds a bachelors of science in accounting and business from Elmhurst College and completed the Executive Management Program at Stanford University. 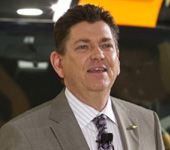 General Motors is making changes in its U.S. marketing operations with former Chevy Marketing V.P. Chris Perry going to vice president, U.S. marketing, replacing Joel Ewanick who was named Global Chief Marketing Officer on Dec. 17, 2010.  Perry, 50, who will report to Ewanick, had served as U.S. vice president, Chevrolet Marketing, since September 2010. Prior to joining GM, Perry was vice president, marketing, Hyundai Motor America.  Perry also spent nearly 10 years at American Isuzu Motors, where he held a variety of marketing and advertising positions. In his new role, Perry will have responsibility for improving the positioning of the Chevrolet, Buick, GMC and Cadillac brands and consumer consideration of GM vehicles in the United States.