Forty new vehicles is the estimated unveiling count at the North American International Auto Show according to show organizers. Thirty worldwide reveals and ten North American debuts, will kick off the New Year at Cobo Center in Detroit January 11th. That count may climb as we get closer. A lot of the news is already out as secrets are hard to keep these days with so many European vehicles just crossing "the pond". We saw numerous unveils in Frankfurt and Los Angeles so what's in store for Detroit?

Among the vehicles to be shown in North America and, possibly the world, for the first time:

BMW will make the world debut of its 340 horsepower twin turbo Z4 sDrive35is roadster and BMW Concept ActiveE with an electric drive system that draws its energy from new, advanced lithium-ion battery pack. BMW is also unveiling the twin-turbocharged inline-6 engine version of the BMW 740i and 740Li sedans. BMW will also display the 465 horsepower ActiveHybrid 7 with an upgraded eight-cylinder engine and electric motor. Next to it will be the 407 horsepower ActiveHybrid X6 with V8 TwinPower Turbo Technology and two synchronous electric motors. The MINI Beachcomber concept will also be center stage in Detroit.

Chrysler's display will have some Italian flavor with a battery-electric Fiat 500. 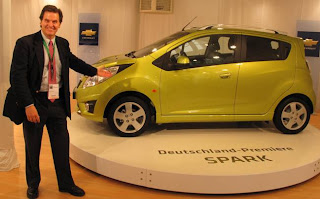 Mercedes-Benz will have its E-Class Cabriolet which goes on sale in mid-January in Europe and in May in the U.S.

Toyota will stage the world debut of a new dedicated hybrid concept vehicle.

Volkswagen may have a new 2011 Jetta and a CC R-Line news announcement. R-Line equipment is already offered on seven Volkswagen models in Europe and now the Passat CC is getting a sportier touch.

Volvo is presenting a complete battery electric Volvo C30 with a range of 93 miles.

All the news from Detroit will come from media conferences on January 11th and 12th.