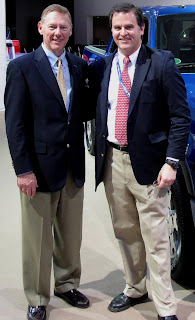 Ford reported a full year 2009 pre-tax operating profit, excluding special items, of $454 million, a $7.3 billion improvement over a year ago. Ford posted full year net income of $2.7 billion, or 86 cents per share, driven in part by favorable net pricing, structural cost reductions, net gains on debt reduction actions and strong Ford Credit results. Ford reported its first full year of positive net income since 2005 and a $17.5 billion improvement over 2008. Revenue for the full year was $118.3 billion, a decline of $19.8 billion versus a year ago.

“While we still face significant business environment challenges ahead, 2009 was a pivotal year for Ford and the strongest proof yet that our One Ford plan is working and that we are forging a path toward profitable
growth by working together as one team, leveraging our global scale,” said Ford President and CEO Alan Mulally (pictured left).

Fourth Quarter
Net income for the fourth quarter was $868 million, or 25 cents per share, a $6.8 billion improvement over a
year ago. Excluding special items, Ford posted pre-tax operating profits totaling $1.8 billion during the fourth
quarter, a $5.5 billion improvement from a year ago. On an after-tax basis, excluding special items, Ford
posted an operating profit of $1.6 billion in the fourth quarter, or 43 cents per share, compared with a loss of
$3.3 billion, or $1.40 per share, a year ago.