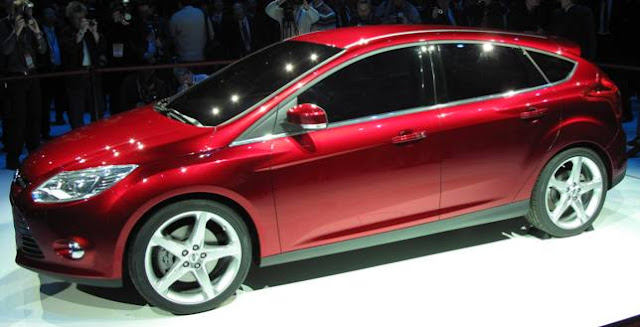 The all-new next generation 2011 Ford Focus debuted at the North American International Show and may have been the most significant introduction in Detroit this year, mainly because of its sales volume potential worldwide. The Focus which will go on sale in both Europe and the U.S. a year from now in early-2011 in both the four-door sedan and five-door hatchback body styles, will have a completely new 2.0-liter gasoline engine for the North American market that features DI and Twin Independent Variable Camshaft Timing for enhanced performance and fuel efficiency. The new 2.0-liter DI Ti-VCT engine is up to 20 horsepower more powerful than the current 2.0 Duratec I-4 unit with projected fuel economy gains of more than 10 percent. The 2.0-liter DI Ti-VCT engine is mated with the latest dry-clutch six-speed Ford PowerShift automatic transmission which uses an advanced dual-clutch design.

The Focus will offer MyFord, which provides the driver with a combination of controls and display screens to operate the key vehicle features. On high series vehicles, the MyFord system includes an 8-inch touch screen. Also, a new generation of Ford’s powerful SYNC® connectivity package, which includes a sophisticated voice control system, Bluetooth and satellite navigation, along with connection points for a wide variety of external devices and media players.

The new Focus may take a bite of the popular Mazda3 which is on a similar platform, though Ford execs say the Ford Focus is targeted at the high-volume Toyota Corolla and Honda Civic model lines. The stylish design will attract young as well as budget-conscious buyers looking for fuel economy and technology perks. Again, because it's a new generation of a popular, affordable model with an attractive new design and huge sales potential, it was my top pick introduction in Detroit.