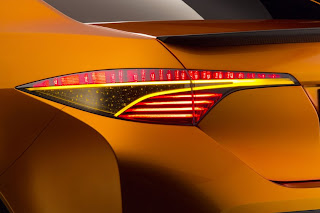 The Toyota Furia Concept sedan will make its world debut next week at the North American International Auto Show in Detroit. The Furia will be revealed using a structure housing thirty of Samsung Display’s new 46-inch transparent LCD screens to partially obstruct or completely block view of the vehicle until the panels are made completely clear to show the car.

The global reveal of the Furia Concept will be broadcast live via Livestream at http://new.livestream.com/toyota.
Posted by Rich Saxton at 5:03 PM